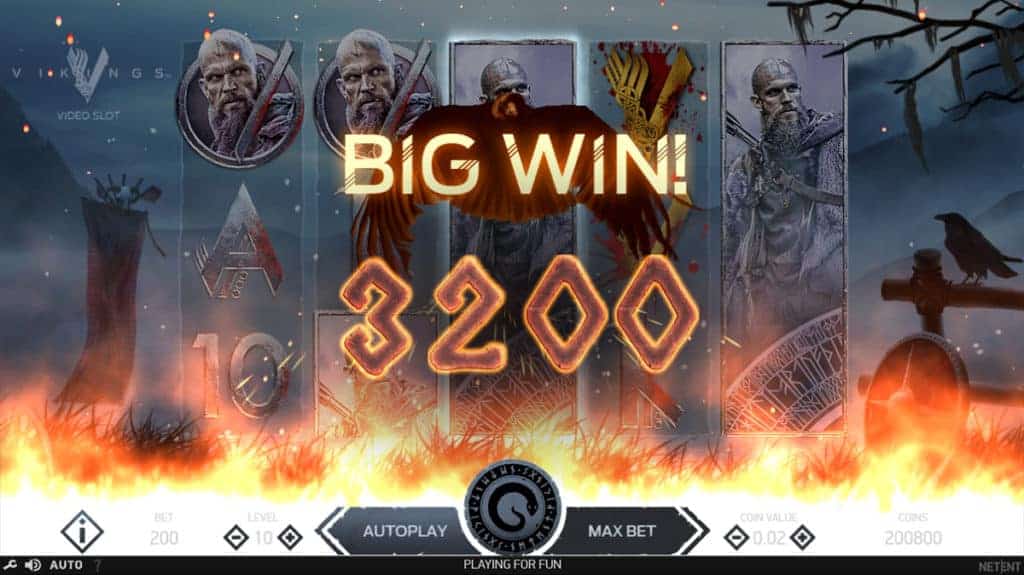 Wow, 2018 is at an end. And what an unbelievable year it was. We’ve had so many great slot releases, it’s tough to whittle them down to our top five. If 2017 was the year of epic slots adaptations then 2018 is the year that blazes trails and goes retro. But you know what, we’re going to try. So here goes. This is our 2018 Top Five Slots of the Year…

Coming in fifth place is ELK’s Wild Seas, a five reel, 178 Ways to Win slot that transports us back to the Golden Age of piracy. Taking to the high seas, we join Captain Anne Bonny on a hunt for treasure, attacking merchant ships along the way and plundering their loot. There are various levels of this game, each of which give us fun animations and mini-games, for instance when we’re firing cannons against ships and being rewarded with free spins! It’s a great way to differentiate from the typical Scatter-triggering free spins round and we get to feel like a pirate. Why? Because we arrrrgh!

Next up is NetEnt’s Asgardian Stones, a five reel, 20 payline slot that gives a different spin (hehe) on Norse mythology. Instead of bombarding us with depictions of Thor and Loki, we see the gods carved in delicately designed runes. Or stones. This slot uses the super Avalanche feature, meaning we can win more than once on each spin. The Colossal Crush feature increases our Multiplier Meter while the Bonus Wheel feature gives us cash prizes and Free Spins. When they all combine, the Gods are definitely on our side, helping us towards 2,000 times our stake on each Free Spin.

In third place is Deco Diamonds, courtesy of the partnership between Microgaming and Just For The Win. This year has been hectic for the duo, giving us slots such as Reel Talent, Icy Gems and Sidewinder, to name but a few. But Deco Diamonds is one of our faves this year. It’s a modern take on the traditional fruit machine classic, with Lemons, Melons, Bells and Sevens appearing as the main symbols, but all in a 3D type design, set against a smooth reel case. It looks classic with a glitzy touch and over five reels and nine paylines, we get to enjoy the Deco Diamonds Respins, Bonus Wheel and the Diamond symbol itself which can give us up to 1,000 times our stake. Told you it was classy.

Then we get to Microgaming’s Poke the Guy. Erm…where do we start? Microgaming does it best when it described it as a “simple, silly, fun” game. Which it is. This instant win game shows us a map with famous landmarks, such as the Eiffel Tower and the Sphinx and an odd man in a yellow jumpsuit, gyrating across the screen. We select from a variety of weapons to try and skewer, stab or nibble him to death. Not much poking involved but the pure absurdity of this game makes is so much fun to play! And the generous wagering limit isn’t half bad either.

Taking top place as our favourite slot of the year, has to be NetEnt’s Vikings slot, the adaptation of the hit show. Who better than the Swedish giants to recreate the magic of the hit Scandinavian inspired TV show? With reels ranging from five to seven and paylines from 243 to a whopping 78,125, we sure can hit up some plundering. Raid Spins, Shield Walls and Hotspots allow us the chance to win up to 10,000 times our stake on each free spin. On top of that, we get to see all the show’s favourite characters, including Ragnar, Bjorn, Loki and Lagertha. We’d even be as bold to say that it’s better than the TV show. That’s why it gets number one in our top five slots of the year.

It’s difficult to settle on just five great slots this year but we tried and Vikings, despite not being out that long, is our favourite. What’s yours?  And if that’s just what we had in 2018, imagine what 2019 is going to look like! The sheer thought is enough to give me goose pimples.