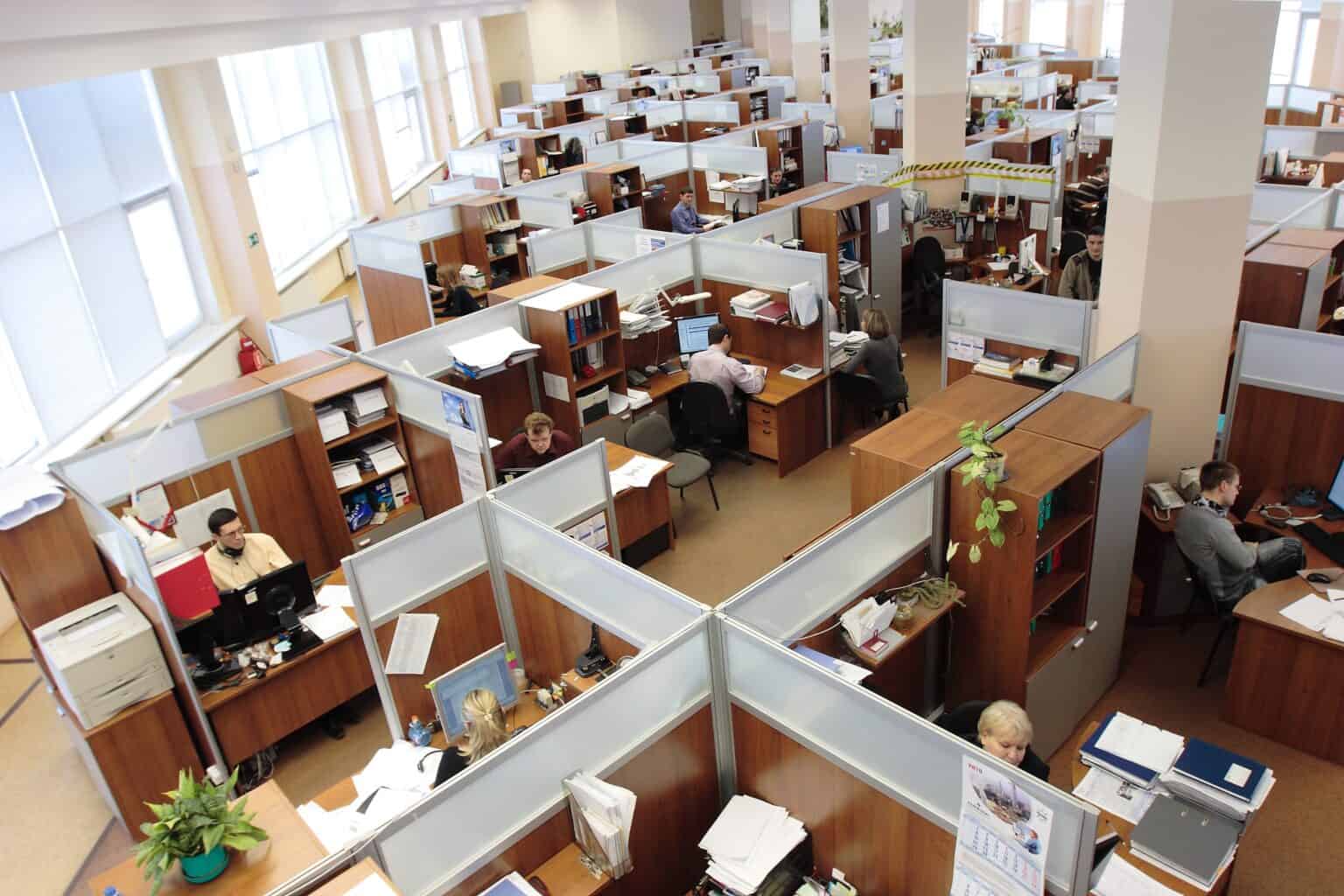 Find out what British workers like to do while skiving off work, whether it’s spending over an hour on YouTube at their desk or sitting on the toilet on WhatsApp

Perfecting the ability of not working while at work is no mean feat. It requires an incredible amount of skill, commitment and time honing your craft before you can truly become proficient at it. Many techniques that workers use in the pursuit of looking busy at work include:

But just how good is the UK workforce at not working while at work?

1 in 5 workers admitted to us that they spend over half their time at work, that’s 20 hours per week, not lifting a finger. They must either be extremely efficient at their job or have very understanding bosses. The average amount of time that workers spend not working is just over 5 hours per week, or 37 days per year.

Those missing work hours leaves a £294bn hole in the UK economy, extra money that could have been made had those hours been used productively.

It appears that most UK workers have the skill of not working at work pretty nailed down, but what exactly are they doing when they are not grafting? The modern world is full of enticing distractions, whether it be from social media, friends constantly messaging you or simply a good old natter about what you did at the weekend with your colleagues.

YouTube is by far the favourite activity of the average workplace skiver, probably due to the fact that a video can more easily be explained away than having Facebook chat alerts buzzing every second while at your desk. Workers also have the cover of headphones to hide the sound of their favourite cat videos from playing on repeat.

Other things that employees like to do to kill an hour in the office every day is to make hot drinks, have idle chit-chat, browse Instagram and smoke or vape. 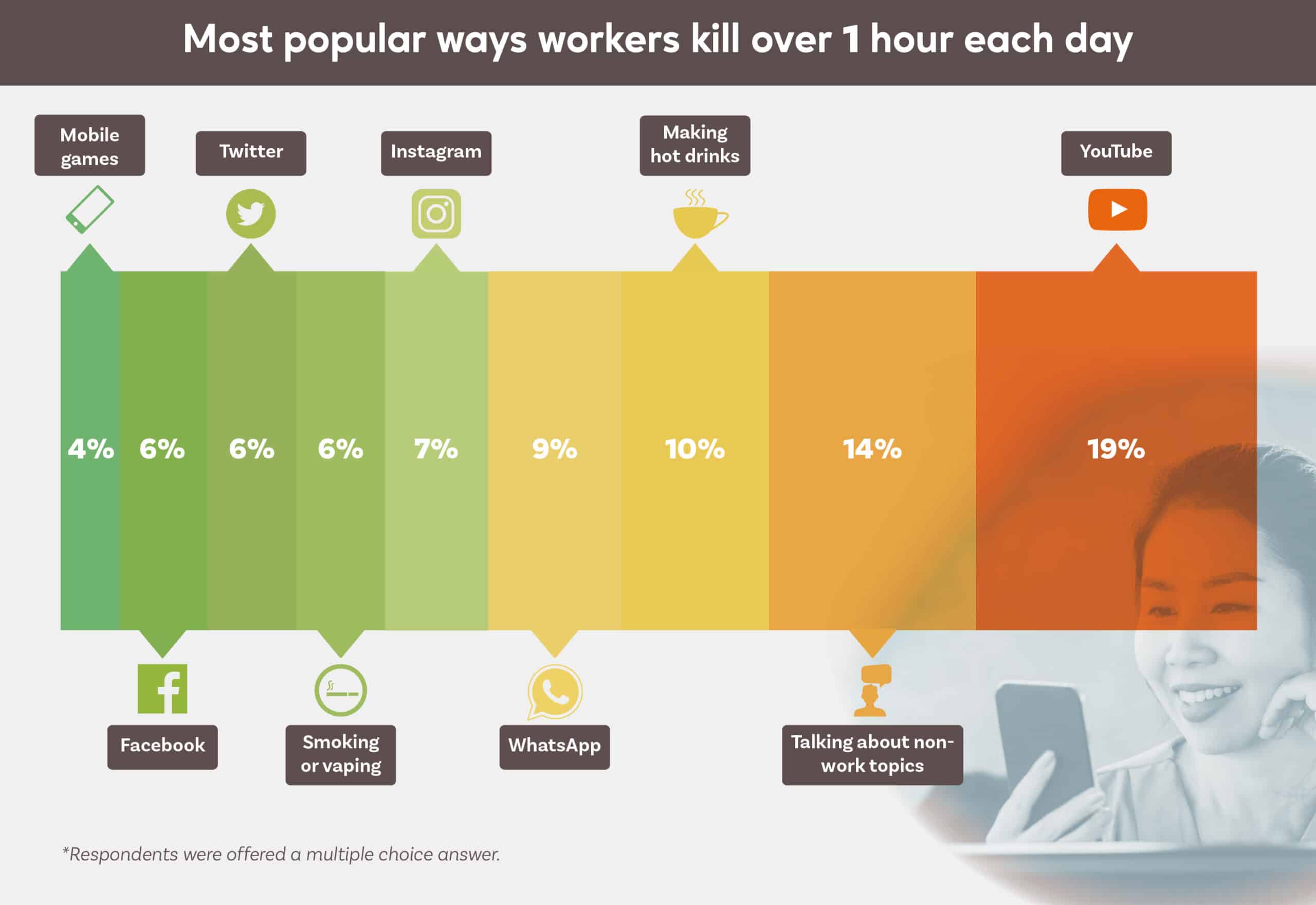 It’s not only at their desks that workers see the opportunity to skive. In every workplace, there is a fabled place with no interruptions from curious co-workers or the judgemental eyes of superiors. It’s heaven on earth for a workplace skiver. It’s known as the toilet. Find out what workers really get up to when they are at the toilet, and how long the average person spends there during a typical 7-hour workday. SPOILER: they’re not doing things you’d normally associate with a toilet!

Another way that businesses risk losing valuable earning potential and the ability to maximise profits is that their employees take unnecessary toilet breaks when they want to check Facebook, message a friend or to simply skive off work.

We asked UK workers how long they spend at the toilet during a standard 7-hour workday when they don’t have to use the facilities for things that you’d normally associate with a toilet. It turns out that nearly 1 in 5 employees like a nice break of over 30 minutes per day at the water closet, while most workers choose to spend between 5 and 10 minutes sitting on the potty when they shouldn’t be. Every single employee surveyed admitted to skiving at the toilet at some point during an average workday. 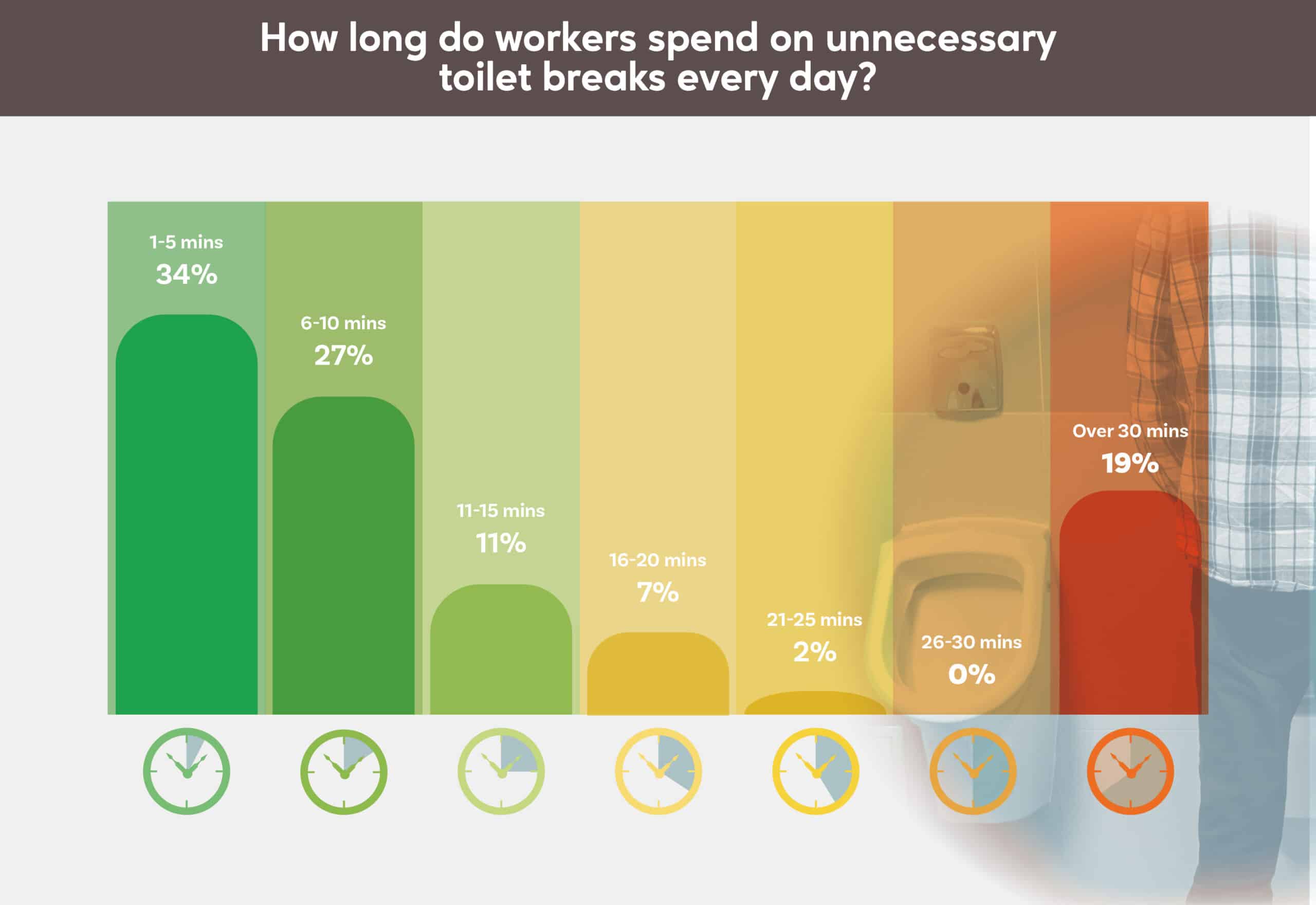 Checking Facebook is the UK worker’s most popular toilet skive

But what do workers like to do when they are skiving at the toilet? 8% told us it was simply to get away from their colleagues, but most had a specific thing in mind once they entered the safe space of the lavatory, free from annoying work colleagues and overzealous bosses.

Although we highly doubt that many Instagram stories are taking place in workplace cubicles around the country, social media was far and away the preferred choice of worker toilet skive activities. A huge 61% told us that they regularly check Facebook while killing time in the toilet, followed by Instagram and checking in with friends on WhatsApp. 12% of employees like to fill their unnecessary toilet breaks with mobile games such as Angry Birds, Candy Crush and Clash of Clans – and to be quite honest, we can’t blame them. 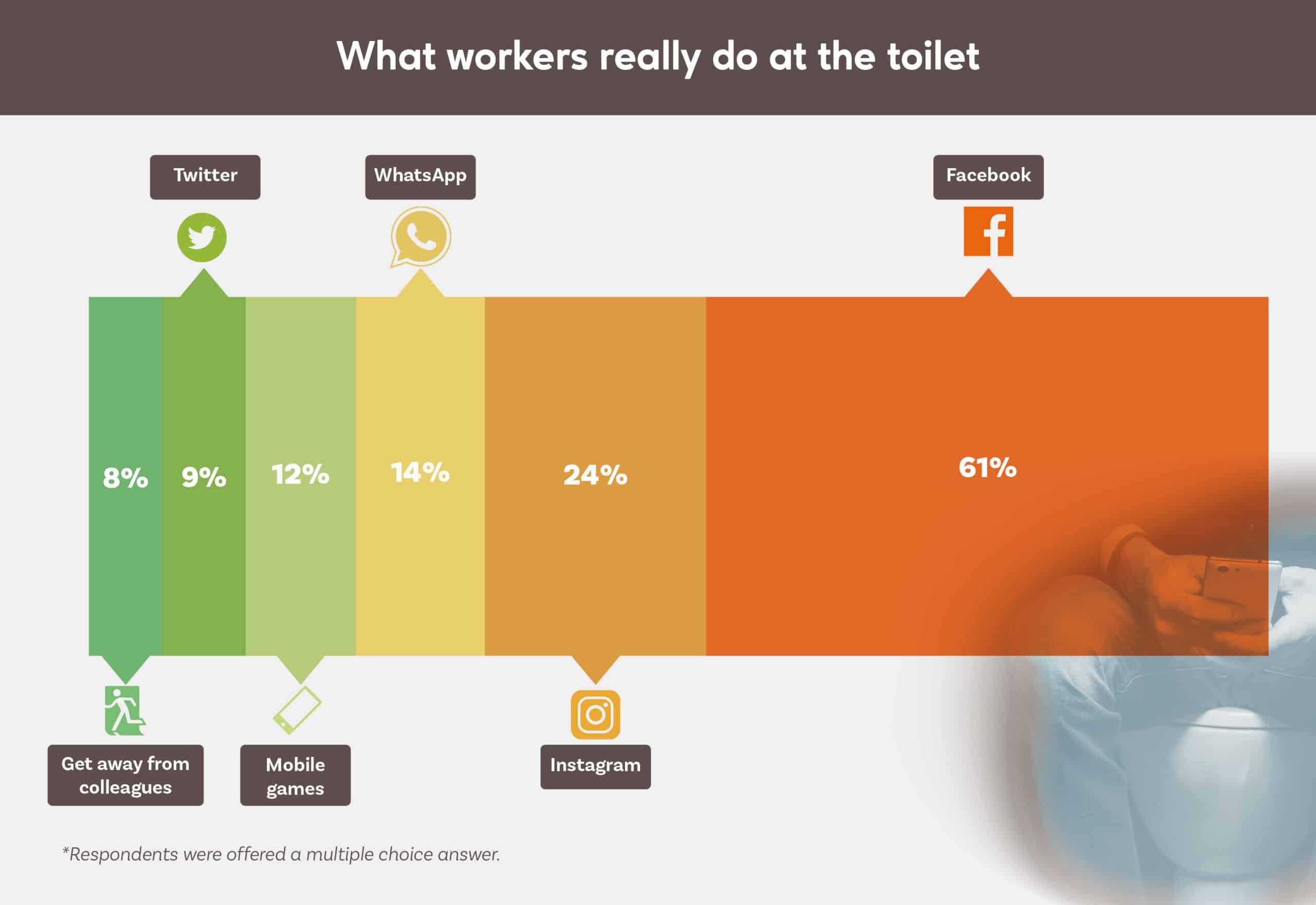 So, there you have it. When workers aren’t working at their desks, it’s YouTube. When they’re not working by taking unnecessary toilet breaks, it’s Facebook. We’re guessing the reason for this is if you happen to be at the toilet and hear highlights from the latest episode of I’m A Celebrity Get Me Out Of Here playing from the adjacent cubicle, you might get a little suspicious of your colleagues toilet habits.

We’re sure that some “next level” office worker has shown peak levels of productivity and also taken their headphones to the toilet with them so they can both check Facebook and watch a video at the same time. If that is you, we commend you.

Believe it or not, this level of skulduggery by UK workers doesn’t end there. They’re even prepared to steal items, rather than time, from their place of work – and we’re not just talking about a few post-it notes.

Beg, Borrow and Steal: Where Have All The Laptops Gone?

It’s a common occurrence in a lot of workplaces. You go to the toilet early in the day and there appears to be a plentiful supply of toilet roll, but when you go back there’s hardly a single scrap left. It only leaves one possible outcome… you have a toilet roll thief in your midst. But it’s not only small, low value items that go missing from UK workplaces. Workers seem to have expensive tastes when perusing their workplace for items to make their own.

8% of workers admitted to stealing a computer or laptop

Before we quizzed employees on what they’ve stolen from their workplace, we naively thought that high value items such as computers, laptops and actual “real life” money would be safe from the prying eyes of the workforce, but how wrong we were. 8% of workers admitted to stealing a laptop or computer from their workplace, which was a higher number than stationery (6%), Food (3%), batteries (3%) and mugs (2%).

Considering that there are 32.5m people working in the UK, that would mean that 2.6m laptops or computers have gone missing from businesses around the country. If the average commercial laptop costs around £600 due to the high specifications needed to carry out business related work, in total around £1.56bn in value has been taken from UK businesses through stolen laptops or computers alone – and that’s not even counting the toilet roll missing from the lavatory! 3% even admitted stealing cold hard cash from their workplace.

Employees’ passion for acquiring workplace items when nobody’s looking appears to be a regular thing. Having already established that 1 in 5 workers spend over half their time at work not working, it’s now clear what they do spend their time on – eyeing up their next workplace item takeaway.

Nearly 1 in 10 employees steal from work every day

Our research has shown that nearly 1 in 10 workers steal an item from work every day, ranging from the mundane to the extraordinary. Look around you. Which of your colleagues strikes you as having a dastardly tendency towards stealing the office sweets, swiping the last Diet Coke in the communal fridge or stocking up their home pen pot after hours?

It’s a common complaint of many workers, that they are NEVER able to find a stapler, pen or fresh notepad – no matter how many new ones their company orders. As it turns out, it could be because one of your colleagues has decided to claim them as their own the night before, day in day out.

Although workers have a weakness for high price laptops and the occasional toilet roll heist, there are certain lines that most won’t cross. We all have a moral centre, and the UK workforce is no different. So where exactly would they draw the line and subdue their thieving habits?

The UK Workforce’s Morality Gauge: Which Items Are More Likely To Go Missing?

Of course, there comes a point where even the most ardent defender of an employee’s right to claim their workplace’s lavatory paper as their own has to draw a line. Enough is enough. We wanted to find out the items where UK workers would draw the line and stop taking from their workplace. To do this, we asked which items they have considered stealing in the past?

Over half of employees would consider stealing money from their workplace

Although 1 in 10 UK workers have taken it upon themselves to take a work laptop or computer home with them of their own accord, it turns out that over half would have no moral objection to taking money or the latest Apple Macbook back to their humble abode should the opportunity arise, or should they be able to get away with it.Our morality gauge below shows the percentage of employee’s that would consider stealing several common workplace items: 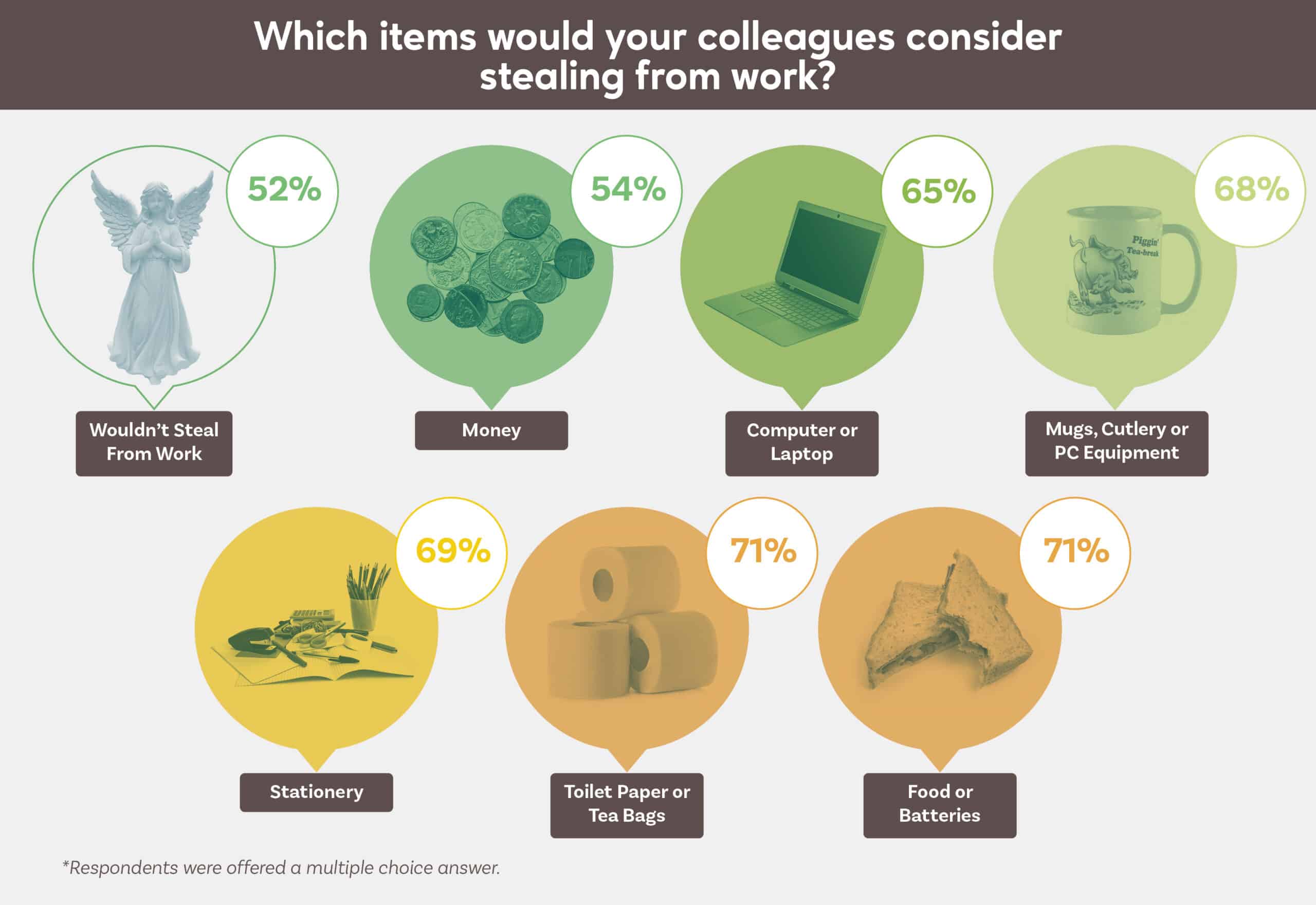 The top row of the graphic features items that are of a higher value. However, these items also have a higher potential risk of a fellow colleague noticing and getting caught. That makes us wonder, does our morality gauge actually show the morals of the UK workforce, or the items that they consider too risky to take home?

BEWARE – Although we see the funny side of taking the odd toilet roll home to replenish your supply or some batteries for your TV remote, your employer might not. A recent study by YouGov found that “one in eight employers consider theft of minor office stationery like pens and pencils a very serious matter”. We leave the choice to whether or not put off the arduous trip to Asda in favour of a dicey grab from the office stationery cupboard completely in your hands.

I’m Leaving, And So Are The Databases

So, UK workers have proven their thievery ability during their tenure at their company, but what about the day every employee dreams about?… the day when they can kiss their current job goodbye and move on to greener pastures. That’s the final opportunity to put one over their employer and it seems that some workers are happy to take a little, or a not so little part of their old job with them to their new one.

14% of workers take company databases with them when they leave

Increasingly in the modern workplace a great deal of a company’s value is stored in the cloud, such as internal research and databases. The most valuable items that a company owns has switched from the physical to the digital. When an employee leaves a business, with a simple click of a button they could download some of their companies most valuable and hard-earned secrets, but how common place is this?

We asked the UK workforce if they were to leave their current workplace, would they take a little memento with them, namely company databases and client information potentially worth tens of thousands of pounds and in some cases much more. As it turns out, workers have been quick to realise the value of this data and the potential advantage it would give them in their new job.

14% of workers admitted to us that they had stolen company databases upon leaving a previous place of employment, along with 9% of respondents claiming to have taken important client information with them to their new workplace.