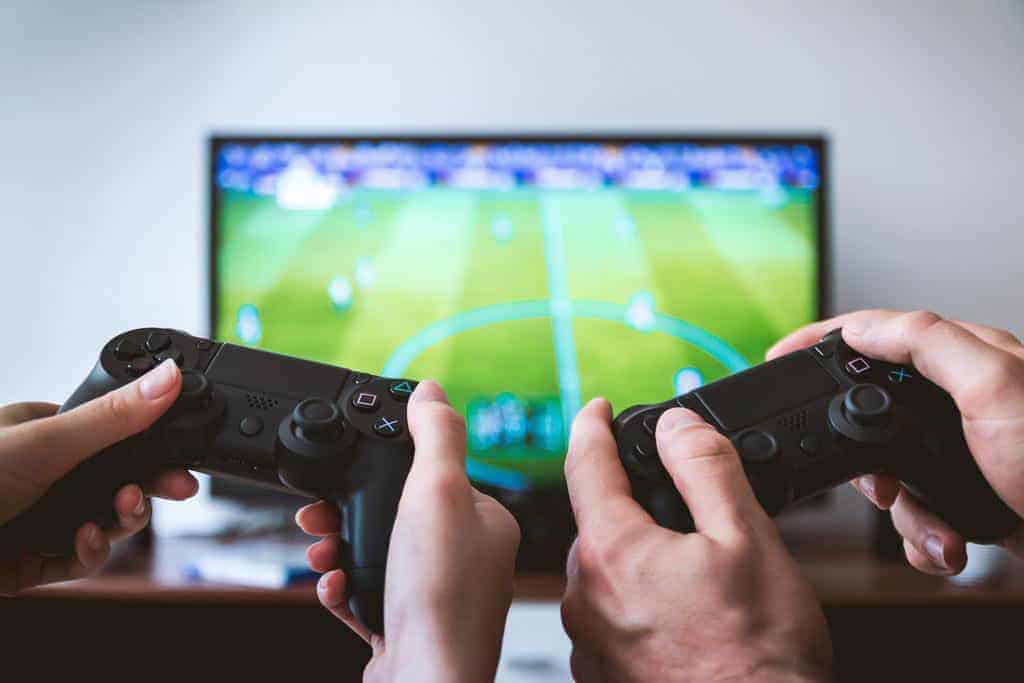 We counted thousands of video game and movie titles to see if it now requires more people to create a triple-A video game than a blockbuster movie, and the role micro transactions have potentially played in the growth of the gaming industry.

The video game industry now attracts A-list talent to star in its games, such as Norman Reedus in Death Stranding and Keanu Reeves in the soon to be released futuristic RPG Cyberpunk 2077. Along with these famous names, a triple-A game now requires a team of thousands of developers, designers and programmers all working together over many months to make sure their latest iteration is on shelves in time for release day.

However, this wasn’t always the case. Many of the world’s favourite video games from decades gone by needed only a small team to bring them to life. One of the world’s most played games, Pac-Man, was famously created by a team of only 9 people headed by legendary game developer Toru Iwatani in 1980. This was reflected in the game’s end credits and, as you can see by our graphic below, this was the case for many other retro games. 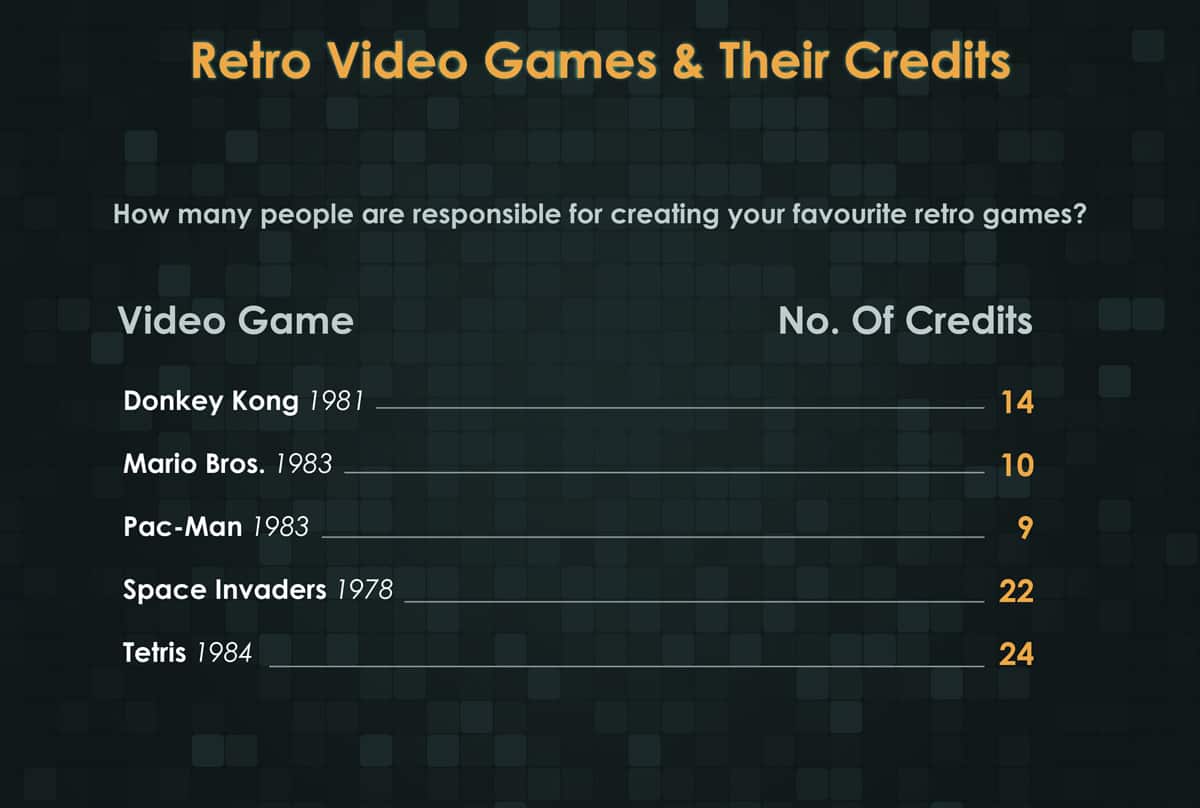 As time as time went on and video games made their way into the mainstream, more and more money was invested into the industry. This, along with more powerful gaming machines and the increasing complexity of video games meant there are now larger teams needed in order to create them.

Historically, movies have always been the bigger brother of gaming in terms of revenue generated, mainstream appeal and the investment needed to bring them to life, but that’s changing.

According to the latest Market Report by Newzoo in 2018, video games now generate revenue of £107bn ($137bn) each year. This eclipses the annual revenue enjoyed by movies, currently standing at £32bn ($42bn). However, is this reflected in the number of people needed to create both types of media? Are lead game programmers now more valuable than leading actors and actresses such as Leonardo Di Caprio and Jennifer Lawrence? Casino Kings counted the credits of the 10 highest-grossing video games and movies of the past decade to find out. 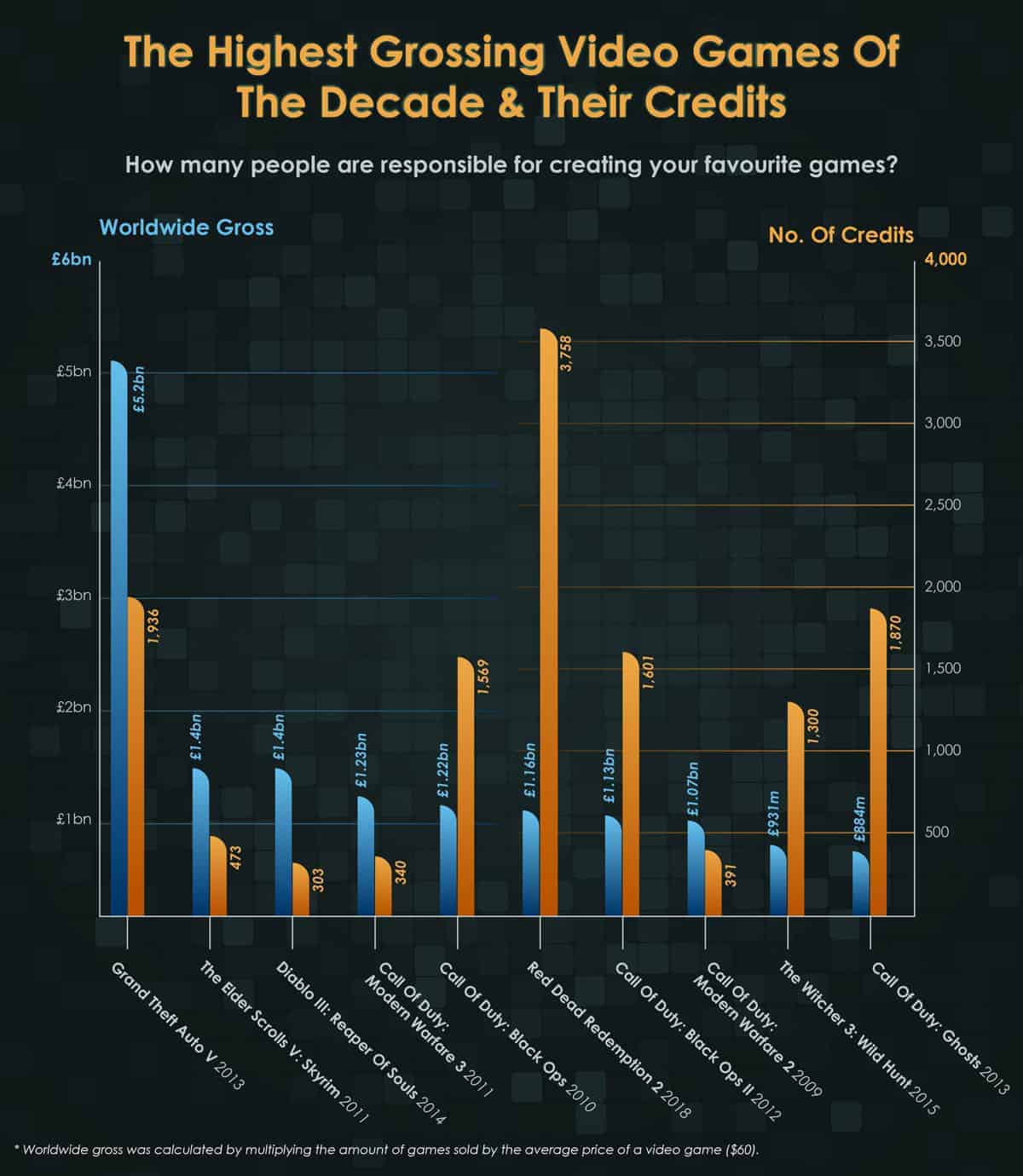 When it comes to video games, there is one stand out winner in terms of the number of credits, and unsurprisingly it’s Red Dead Redemption 2, taking over 3,700 people to create. Upon the release of RDR2, the game was unanimously praised for its exceptionally high level of detail, showing new houses and train tracks being built over time and the ability to be struck by lightning during a thunderstorm. Open world games rank highest on the list, with RDR2 being accompanied by another Rockstar game, Grand Theft Auto V at the summit.

The list is rounded off by several Call Of Duty iterations, and the likes of The Elder Scrolls V: Skyrim and Diablo III: Reaper Of Soul. Interestingly, the games that make the most revenue seem also to require the least amount of credits, with rarely released triple-A open-world games being the anomaly. This is likely down to the investment needed to create them as shown by the number of credits. 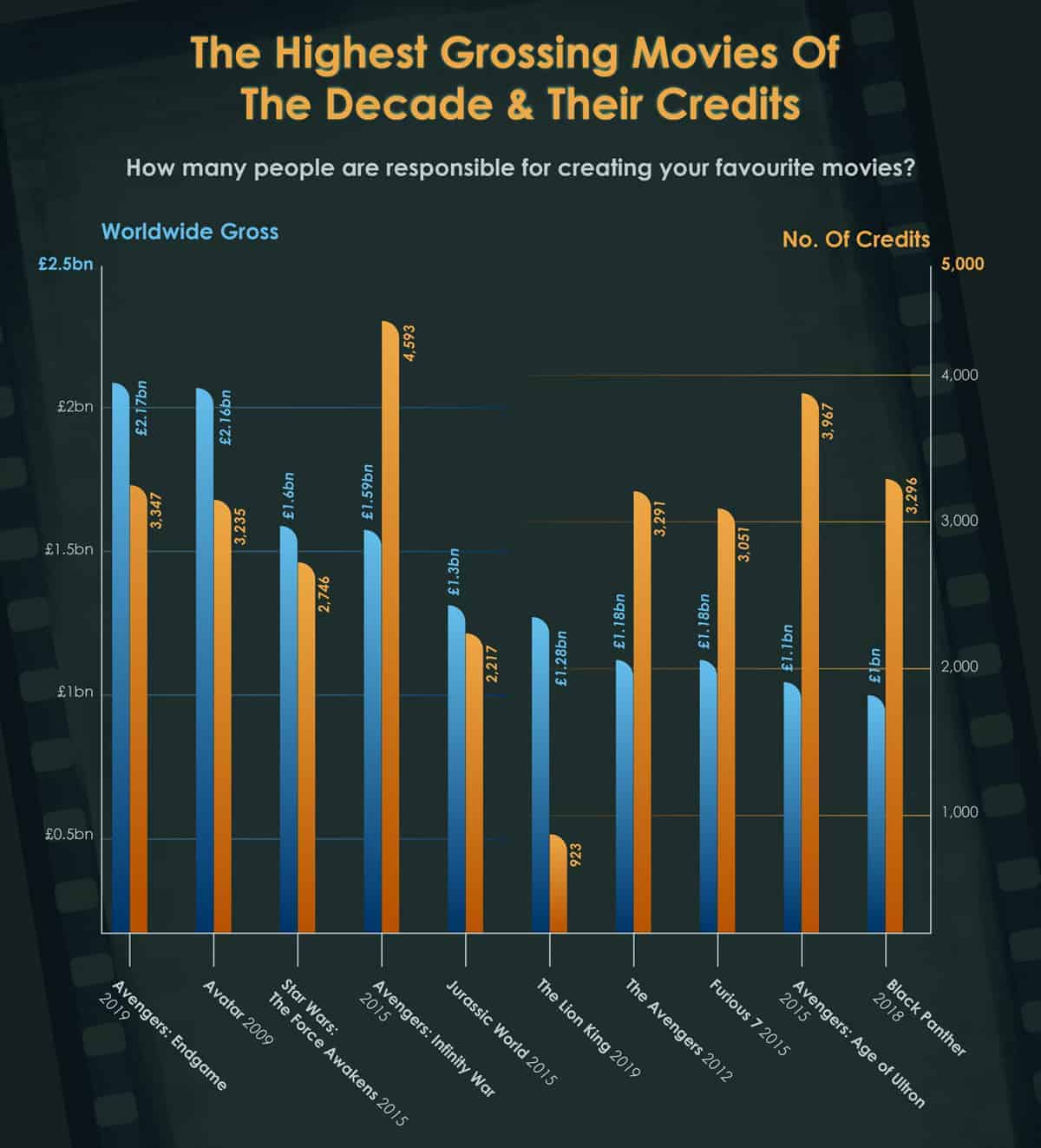 The amount of credits needed to create blockbuster movies still far outweighs the number needed for video games, although the gap since the days of the 9-person team who created Pac-Man has narrowed considerably. Of the top 10 grossing movies of the decade, Avengers: Infinity Wars had the most credits, with a whopping 4,593.

The amount of credits needed to create movie blockbusters remains consistent in our data in comparison to the revenue generated, with The Lion King being the outlier. After Avengers: Age Of Ultron, Red Dead Redemption 2 would come in at number three on a combined list of the highest video game and movie credits. This shows the great strides that video games and gaming in general have made in comparison to movies.

Our research also shows that movies generate more revenue than gaming, contradicting overall industry figures listed earlier in the article. However, this is before taking into account the micro transactions available in most video games. So, could it be that micro transactions, although highly criticised, are fueling this growth in gaming, as the people behind them seek a more profitable return on investment? 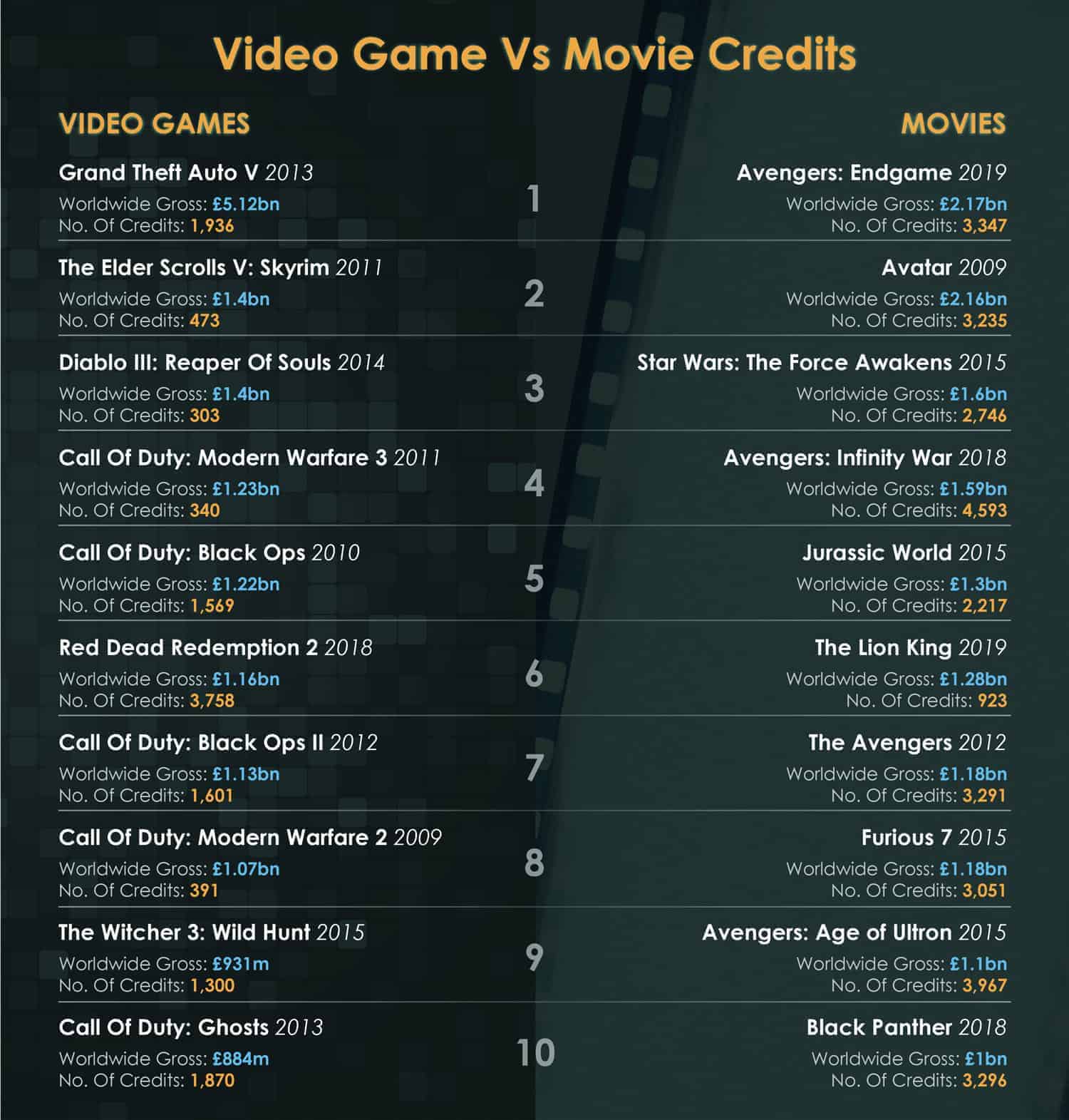 Video games require fewer people to make than movies, and once micro transactions are added to the gross revenues generated by the sales each game, are also more profitable. Game studios are typically extremely guarded about the amount of money that they make from micro transactions, so it’s difficult to source accurate data. However, previous reports of Fortnite making £300m in one month from micro transactions and Ultimate Team, a monetised game mode within FIFA, now generating more revenue than sales of the game itself gives you an idea of how much money games are making from added extras.

Although micro transactions are highly controversial, without them it seems gaming would still be lightyears behind movies in terms of revenue generated. The additional earnings from micro transactions have made video games a more profitable business model than movies, which has led to increased investment and has, in turn, led to a team of over 4,500 people creating Red Dead Redemption 2 – a game that we can all enjoy for its realism and attention to detail.

We can also take into account the average amount of time that people play or watch both types of media. Today, with the exception of horrors and animated films that last 10 minutes longer, the average films last for around 1 hour and 20 minutes. Unless it’s a classic, even the most hardened movie fan is unlikely to watch the same movie twice. The engagement level in video games is enormous by comparison, with users playing a single game for one hour and 20 minutes on average… every single day.

The shift towards video games from movies looks set only to continue in the next decade, both from a user engagement perspective and the profitability for those who make them.