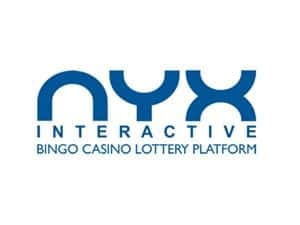 NYX Gaming Group is the gaming equivalent of the X-Men. It even has an X in it’s title.

Comprised of NYX Interactive, NYX Social, NextGen Gaming and OnGame, the NYX Gaming Group pools its resources to deliver top-level top-down gaming solutions to operators and gamers, making business, customers and players all want to take their tops down in return.

But this is still not the sum total of the group. NYX Gaming has more partners than a retired tennis player on the senior doubles circuit.

Winner of eGR’s RNG Casino Supplier of the Year 2013 and Special Achievement 2014 awards, NYX continues to write gaming headlines. Not a month goes past that doesn’t see NYX launch its NYX Open Gaming System™ on a new operator, including some of the major players in the gaming industry. Trying to keep up with its news pages is like to trying to read the FT while Mo Farrah runs away with it.

Of course, no modern gaming tech innovator would be worth its salt without a pretty serious mobile offering, so its finger-licking that NYX MOVE mobile gaming system provides players with a PC game experience with a tablet and mobile finish.

With offices in Las Vegas and development out of Stockholm (ELK Studios, Thunderkick) and Sydney (NextGen Gaming) with support from its London commercial office there are always plenty of takers for the company’s cross-office secondment initiative.

No wonder. Separately they are awesome. Together they are unstoppable.

Revisiting Aztec ruins on the slots is always a blast. But Montezuma Megaways Slot runs with the idea, quite literally. An Aztec theme, cascading reels…

NYX works with Inspired Gaming to breathe new life into American Football With it’s 1st Down Slot. While it may be massive stateside, plenty of…

Queen of the Castle

Continuing its mission to create innovative new online slots, NextGen puts a new spin on the ‘king of the castle’ phrase. In fact, it flips…

Not one to shy away from one of the earth’s most dangerous elements, NextGen puts the heat on with its Flame Slot. With a name…

Do you ever get tired of birthday celebrations? If the answer to that is “yes”, the five reel, 178 Ways to Win Birthday! Online slot…

It’s no coincidence that NextGen set the launch of its Top Strike Championship Slot to release in time for the Russian World Cup in 2018.…

Ahh, the tale of Aladdin! The story of the genie in the lamp has captivated us since the 18th century, forming a later addition to…

Being sung to by beautiful maidens while we are out at sea? Sounds heavenly. Until we learn that they are luring us to our doom!…